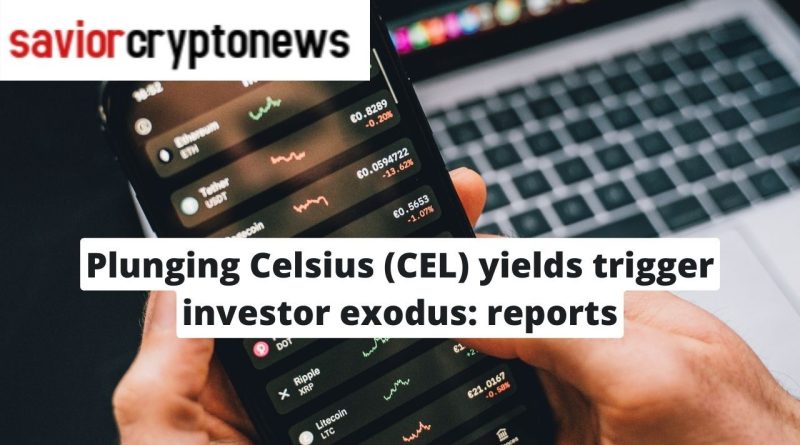 One of the industry’s biggest centralized crypto lending platforms, Celsius, is facing pressure from investors who have been struck hard by the current market crash.

According to reports, all may not be well at the celsius crypto lending platform. Some buyers claim they have been unfairly brushed out, while company CEO Alex Mashinky asserts that hostile actors are trying to collapse the system.
Celsius is one of the crypto industry’s biggest lenders, with $11.8 billion worth of assets. The company works by lending out digital assets that users have deposited while offering them high profits in interest in return. Celsius also lets investors take out loans at lower rates using crypto as collateral.
This model works just fine when markets are buoyant, and demand is high, but the entire system becomes unbalanced when prices tank hard and fast as they have been doing this month.
Bitcoin bull Max Keiser compared the high returns on Celsius to those previously purposed by DeFi platforms harnessing UST and LUNA.
Terra First, then Celsius Next?
On May 18, Barron’s said that the firm has come under pressure on two fronts lately. Regulators argue that they operate above the law, and the crypto crash has led to panicked customers withdrawing their funds.
This week on Twitter, many customers confirmed that they had sold their CEL tokens and requested Marshinsky what the company was doing to support investors. Investors also complained that trading was illiquid as the token prices dropped, which worsened their losses, and the company failed to help its native tokens.
Mashinsky argued that outside malefactors have chosen to attack the firm:
“This is not a coincidence. This is someone who decided, ‘You know what? I’m taking down all of Celsius.”
The report added that he “sparred with users who threatened to leave the company,” claiming he had personally lost “hundreds of millions of dollars” in the collapse of the crypto market.
The thing which added more salt to investors’ wounds was that the firm raised $400 million in a funding round in October 2021.
CEL Price fall
According to a report, the platform’s native token used as collateral for lending has lost a further 2.4% on the day to trade at $0.815. Furthermore, CEL has dropped more than 20% over the last week and a whopping 63% over the past Fortnite as fears mount and investors’ selloff accelerates.
CEL is now selling at a painful 90% drop from its June 2021 all-time high of just over $8.